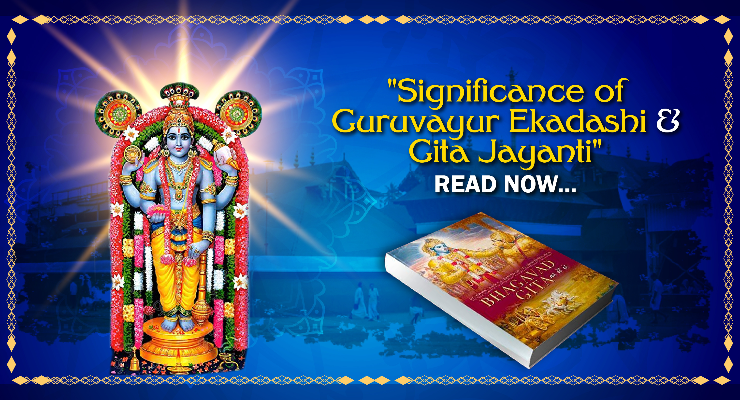 Shri Krishna or Guruvayurappan is worshipped widely in all parts of Kerala. The eighth avatar of Lord Vishnu. This festival is observed on the Malayalam month of Vrischikam, thus the name Vrishchikam Shukla Paksha Ekadashi also known as Guruvayur Ekadashi.

The legendary story behind Ekadashi is that – Once, Lord Vishnu was in Yog Nidra. A demon named Murdanav challenged him to a fight. A damsel arose from the Ekadashi (eleven) Indriya (organs) of Lord Vishnu. Murdanav got attracted to the beautiful damsel and asked her to marry him. The damsel said ‘yes’ but only if he agreed to a duel with her. Blinded by her beauty, the demon agreed to a fight with her, and she killed him. Lord Vishnu granted damsel a boon. She wanted to be named Ekadashi and people should observe Ekadashi fast and control their Ekadash Indriya on this day. Lord Vishnu blessed her with this boon.

1. Kizhakke Kovilakam Pandamangalam Sree Krishna Temple: This temple is situated in the Kotakkal town of Malappuram. A very ancient temple and conducts an Annual festival during Vishu.

2. Chalappuram Sree Krishna Temple: It is one of the oldest and famous temples in Kerala. Located in Kozhikode, it is believed that offering puja at this temple brings peace, prosperity, and Happiness

3. Kochu Guruvayurappan Temple: A replica of Guruvayur temple in Kerala. Located in Bengaluru, the main deity is Vennakrishnan, a beautiful statue holding butter in his right hand and flute in his left hand. Special pujas are conducted for Childless couples and for people suffering from prolonged health issues.

4. Thirunavaya Navamukunda Temple: This temple was constructed 5000 years ago. Located on the Northern Banks of Bharathapuzha, the picturesque view of this temple is breathtaking. According to legend, goddess Lakshmi and Gajendra, the king of the elephants, worshipped god Vishnu here with lotus flowers from a lake nearby. Thus offering of Thamaramala is considered auspicious.

5. Thirumanikkara Sree Guruvayoorappan Temple: This temple is famous and considered at par with the Guruvayurappan Temple. Ekadashi Vilakku, Chuttu Vilakku and Desa Vilakku is the special ritual conducted during Guruvayur Ekadashi. The famous Elephant procession also takes place in this temple during this festival.

How to Observe Guruvayur Ekadashi Day?

· Booking Pujas to the aforementioned temples is now made easy through - Templelinks - A Hindu devotional platform – A mobile application that facilitates Online Puja Bookings, Donations, Live Darshan, and Virtual Queue.

· It is believed that On Ekadashi day devotees have to fast, meditate and recite prayers of Lord Narayana. Applying oil and plucking of Tulsi leaves is prohibited on Ekadashi day. Purify your mind and body by chanting Vishnu Ashtothram and Vishnu Sahasranamam, Download Templelinks - Mobile App and listen or Chant to these Stotrams in the Gallery Section.

· Gita Jayanti/Geethopadesham Day is also celebrated the same day as Ekadashi. It is on this day Krishna gave the holy sermon of Bhagavad Gita to Pandava Prince Arjuna on the battlefield of Kurukshetra. Download and Tune in to Templelinks - App, Watch Live streaming of Bhagavad Gita Verses and its Interpretation in our lives.

Dwadashi Day – The next day of Guruvayur Ekadashi is called Dwadashi Panam. There is a custom on this day to offer the token amount of money to Koothambalam of the Temple, as it is considered highly auspicious.

Puja Booking or Hundi Seva can be done in Templelinks – App. The entire amount of offerings starting from Rs.10 goes directly to the temple’s account.