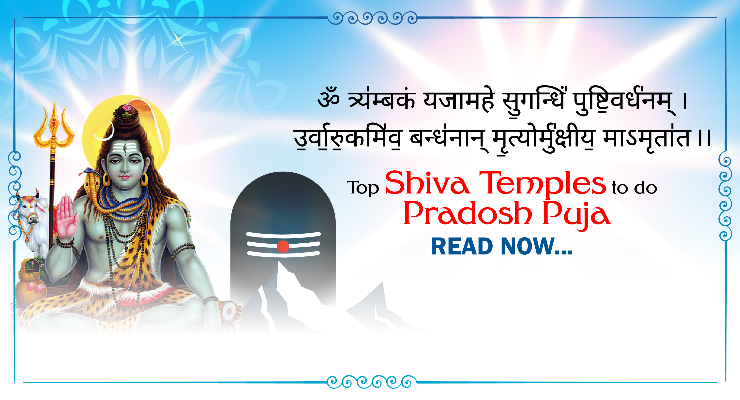 Pradosham literally means “Removal of Sins”. During this time, it is believed that it is an opportunity to eliminate karmic energies that limits potential in your current life.

An auspicious day dedicated to Lord Shiva (Shiva represents Supreme being and serves as a protector of the Universe) and his wife Goddess Parvati.

There are different types of Pradosh Vrat for each day-

When is Pradosham celebrated?

This period is celebrated twice a month (once falling in Shukla Paksha waxing moon and one falling in Krishna Paksha, waning moon) typically on the 13th day of every fortnight. It is a practice in the Hindu religion to Observe fast on this day. According to Hindu Mythology, fasting will free you from the present and past sins.

Where can you witness Live Darshan and Book Puja?

Which Temples performs Pradosh puja on this Day?

1. Perumparamba Sri Mahadeva Temple – A Historic and important temple in Kerala. It is famous among the 108 Shiva temples in India. It is believed to have been built by Lord Shiva’s disciple overnight. The Architecture and the structure of the temple have facts and stories told by Legends and Myths.

Benefits of Booking Puja: Relief from diseases and Poverty

2. Tali Mahadeva Temple – This is one of the oldest temples in Kozhikode. The deity here is a blended form of Goddess Uma and Shiva, known as UmaMaheshwara. It is believed that the foundation of the lingam in the temple is dated back to the Dvapara Yug, built by Sri Parasurama (incarnation of Lord Vishnu). The gateways and fine granite sculptures with intricate carvings are a visual treat to one’s eyes.

Benefits of Booking Puja: Protection from diseases and remedy for the delay in marriage.

3. Tripangode Siva Temple – The most important Hindu Pilgrimage center in Northern Kerala located in Malappuram. It is believed that Siva rescued a young boy named Markandeya from the noose of Yama. Markandeya was blessed with eternal life and remained as a Sixteen-year-old sage. The raging avatar of Shiva that appeared to save the boy - Sage Markandeya is called Kalasamhara Murti.

4. Pracheen Bhairon Temple – Lord Bhairon is an avatar of Lord Shiva. This temple is located in Delhi, an ancient, age-old temple built by Pandavas during Mahabharatha.

5. Paliam Puthiyathrikkovu – Ancient temple located near Paliam Palace in Ernakulam. It is believed that Paliath Achan could not go to Vaikom temple for the Annual worship. Thus, because of his great devotion, Vaikathappan has appeared as a deity here in this temple. Shivaratri brings with it a spirited fervor in all its festive glory.

Benefits of Booking Puja: Get rid of miseries and Escape from perils (affliction)

How can you perform these Pujas?

Pujas to Lord Shiva and 100+ other temples can be performed through Templelinks App – The Epicenter of devotion. The entire amount of offerings starting from Rs.10 goes directly to the temple’s account.

· Register with your Name and Nakshatram/Gotra.

The Temple will be intimated about your puja and the receipt will be mailed within 7 working days.

In Pradosha Puja - All the rituals and Practices are performed after the Sunset. Devotees read and listen to Katha/story of Shiva and Chant Maha Mrityunjay Mantra 108 times. Lord Shiva frees that person from all Salvation!