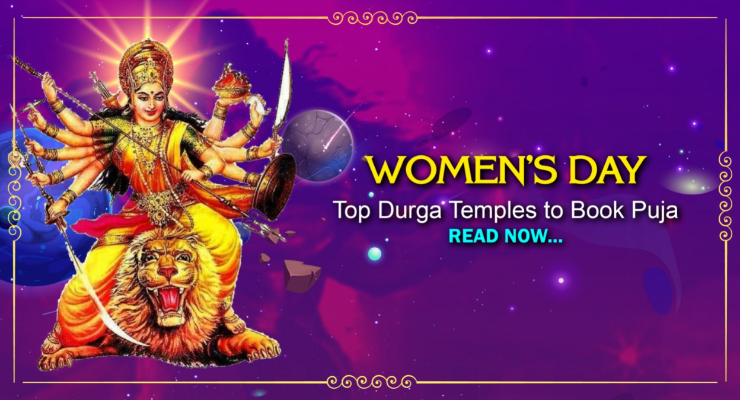 DURGA – Is a Symbol of Women Empowerment.

She is Adiparashakti, the Supreme power, the Divine mother and the protector of all from evil and misery.

Women’s Day is an Ode to Shakti and Maa Durga – the two words which are used interchangeably for mother Goddess, symbolizing the feminine principal, the activating power and energy.

Hinduism predominantly features female figures in both human and divine form. Celebrating womanhood through Hindu Festivals such as Kanya Pujan on the eighth day of the Ashtami, Basant Panchami and Navratri – propitiating Goddess Durga all nine days, is a reminder to all of us that there can be no universe without Woman.

·         Mankulam Sree Parashakti Temple: Is a famous Temple located in Trivandrum in Kerala. The Hisory of this temple dates back to centuries ago when the temple’s main priest was advised of Yogarahsya (the secrets of attachment and renunciation) by a lady who carried a divine brilliance. The temple was built based on this heavenly ordeal of blessing by Goddess Parashakti.

The Main Puja offered in this temple is: Chandana MukhaCharth (Application of Sandalwood Paste on Deity) for Rs. 751/-

·         Aikkara Veetil Devi Temple: Ancient and famous Bhadrakali temple located in Allappey district in Kerala. According to the events described in Markandeya Puranas worshipping Devi Bhadrakali, purifies the devotee and grants liberation from the cycle of birth and death.

The Main Puja offered in this temple is: Kumkumabhishekam (Application of Kumkum on Deity) for Rs.100/-

Benefits of Booking Puja: Remedy for recovery from prolonged illness and For Good luck.

·         Chakkulathamma Devi Temple: Dedicated to Goddess Durga. This temple is located in Bangalore and is a replica of Chakkulathu Kavu in Alappuzha district in Kerala. Pongala is a major festival of this temple celebrated in the month of November/December. It is believed that during this time the Glory of the Goddess is at its peak.

The Main Puja offered in this temple is: Bhagavathy Seva for Rs.1000/-

·         Kumaranallor Devi Temple: Located in Kottayam District in Kerala. This Temple is considered as one of the important devi temples among 108 Devi Temples in Kerala. As per mythological & historical evidence, this temples dates back to 2400 years old. The important festival of this temple is Thrikkarthika celebrated in the month of November/December.

Templelinks enables you to book Puja in all the above Temples for your loved ones. The payments are directly transferred to the temple bank account and there are zero processing charges . To be a part of this digital devotional experience, Download the app now from Play Store / App Store!

Every Woman who awakens Courage within herself is Durga

Every Woman who awakens transformation within herself in Kali

Every Woman who awakens devotion within herself is Parvati

Every Woman who is Nurturing within herself in Annapurna

Every Woman who awakens the Shiva within herself is Shakti.