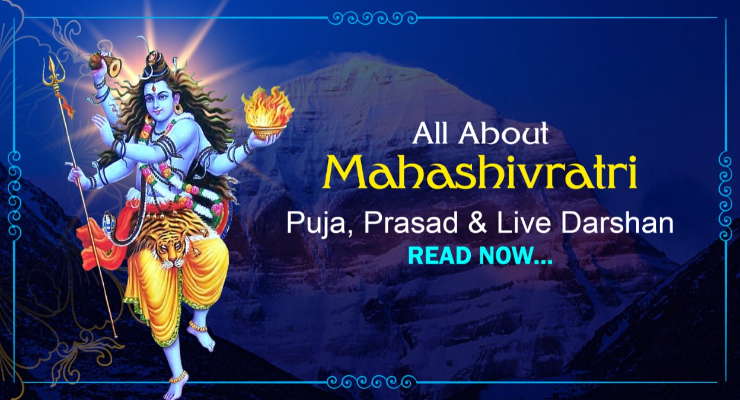 MahaShivratri is an Annual Hindu festival celebrated in honor of Lord Shiva.

Shivratri occurs on the 14th day of Lunar Month. MahaShivratri – “The great night of Shiva”, where he performs heavenly dance called Tandav falls on the Magha month between February & March. This festival is also celebrated to commemorate the marriage between Lord Shiva & Maa Parvati.

What should I do on the Day of MahaShivratri?

·         Observe Fast: It is a tradition to fast on this day, which allows the mind to dwell in the experience of inner-self. Some even fast by consuming Sattvik (Pure) food in moderation and easily digestible food such as Milk, Fruits, Seeds & Panchmeva Prasad (A combination of Five dry fruits Almonds, Raisins, Dry Dates, Dry Coconuts and Makhana). Book Panchmeva Prasad & Offer Puja in Mangalnath Mandir (Highly revered shrine for resolution of Mangal Dosh) only through Templelinks App.

·         Meditation: When mind & body is detoxified, the strength of prayers and intentions gets stronger. Meditating on this auspicious day enables to control the body’s natural process of being with one’s own self. Keep your spine erect and Chant Mahamrityunjay Mantra 108 times or Shiva Meditation Mantra – Download Templelinks App -> Gallery ->Audio - To access Meditation Prayers of Lord Shiva.

·         MahaShivratri Puja & Watch LIVE Darshan: Offer Puja in Top Shiva Temples. The entire amount of offering starting from Rs.10/- is transferred to the temple bank account and there are zero processing charges. The receipt is mailed to devotees post the   completion of Puja. Watch LIVE streaming of Ujjain Mahakal, Somnath Mandir and Kashi Vishwanath All day, only on Templelinks App!

You can book Puja, Prasad & pay homage to three fundamental forms of Shiva such as Mangalnath, Gabhasteeshwar, Kashi Vishwanath & Kaleshwar, which encompasses every possible quality that human mind can perceive & beyond.

·         Mangalnath Temple: Located in Ujjain on the banks of Shipra River. It is regarded as the birthplace of Mars according to Matsya Purana. Famous Mangal Nivaran Puja and Bhaat puja is done to overcome ill effects of Mangal Dosh in your horoscope. Ujjain is known as the “Greenwich meridian of India” because this is where the first meridian of longitude – the tropic of Cancer pass the earth and hence there is a clear view of Mars from this place.

·         Mangalagauri & Gabhasteeshwar Temple: This is a very famous temple located on the Panchganga Ghat in Kashi. It is here that Lord Surya instilled Shiv Ling and Devi Idol which later came to be known as Gabhasteeshwar & Mangalgauri.

Benefits of Booking Puja in this temple – Remedy from Delay in Marriage, Manglik and Marital Discord.

·         Kaleshwara Siva Temple: A centuries old temple of Lord Shiva, Kaleshwar Mahadev temple is the centre of devotion to people of Palakkad in Kerala. This is a very powerful god, said to remove the fear and make one strong mentally.

So, what are you waiting for? This MahaShivratri immerse yourself in thoughtlessness. Pay tribute to Lord Shiva with the help of Templelinks Mobile App. Download NOW

Salutations to Shiva - The Supreme Power, The greatest of all, The Mahadeva.”